Hello and welcome to the first ever post for the Boundless Brothers Blog!!

This blog has been made by a fan, for the fans!

Whether you have recently discovered Boundless Brothers or have been fans for a while and want to get to know the band better, this is the place for you.

All of the information you get here will come directly from the band. We'll talk about their history, their future plans, funny anecdotes and lessons-learned throughout their time in the UK music business.

You'll have the opportunity to comment and ask questions, which I'll put to the band and try to get as many answered as possible.

There will also be a page with links to their music videos and another containing info about upcoming gigs so you'll always be up to date.

For this first post, it only seems right to start with some introductions.

Boundless Brothers are made up of three members.

From left to right we have:
Seb - Bass and vocals,
Sam - Lead vocals and guitar
Bo - Drums and vocalsI caught up with Sam recently and got him to share a bit about how the band came to be and how their music has evolved .
This is some what he had to say about the sound of the band and their origins ...
"If we had to describe our sound now, we are probably mostly lined up with Folk-Rock/Americana but we have explored lots of different styles over the years. We originally started as a bluegrass band, and have delved into indie, alt. rock, pop-rock and more before settling where we are now. We are always looking at ways to include different aspects of music though, we want to keep people excited and enjoying what we do."
"Boundless Brothers has been going by that title for about 6 years, before that we went by Blue Horyzon. It was about the time of that name change that Bo joined us and we started the transition from bluegrass into folk-rock. The band technically started about 12 years ago, I remember calling Seb (my brother) and saying I've met some people and we should start a band ... a week later he moved to where I was living and and from that Blue Horyzon was born. Neither of us played any instruments very well at the time, so in the beginning we were really working on our skills and abilities and had some great help from another band member. Over the years we've had a few different band members and once Bo came on board things really clicked. He's also my girlfriends brother so the title Boundless Brothers was the perfect choice for us".

... Check out next weeks post to hear more from my catch up with Sam where we talk about how their music and experience developed, what their favourite band tracks are and what inspires them.

Plus check out the Music Videos page for links to some of their recent and classic tracks. 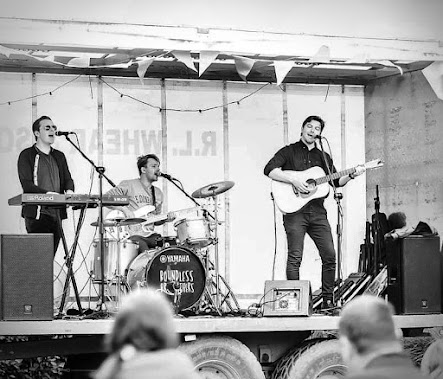